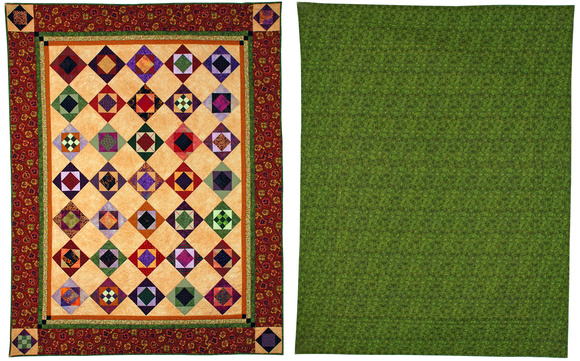 This quilt got its name because it started out as an unassuming little quilt made of leftover – “free” – fabric. But just as there is no such thing as a free puppy, there is no such thing as a free quilt! As I would work on it, it would beg for something else here and something else there, and it wouldn’t take no for an answer. And because I was getting so attached to it, I would give in, and more not-free fabric would find its way into the design. The little green nine-patch, third row down and first block on the left, is my “Ambien” block and has its own story.

Today I received the compliment of a lifetime, and from a most unexpected source. I was at Quilt Etc. picking out fabric for the alternate blocks on my “Free Puppy” quilt. A couple of sales clerks pointed to a little nine-patch inside one of my squares-in-a-square and said how much they liked that block.

“Oh, that’s my Ambien block,” I said, and then told them the story about how I had taken my Ambien and gone to bed, only to find in the morning a perfect 3-inch nine patch square on my cutting board, along with a note I had written to myself telling me the idea for using the block. Apparently, even in my Ambient haze, I had realized that I wouldn’t remember in the morning what I had done or why, and so I wrote the little Post-it.

The clerks were amused at my story, and we chatted for a few more minutes before I went in search of more fabric. I was in the downstairs fabric room in a quiet spot when a lovely woman approached me, and this is what she said:

“You don’t know me and we haven’t ever met, but I’d like to give you a compliment. I overheard your story, and I know you weren’t talking to me, but I wanted you to know how refreshing it was to hear you share that part of yourself so openly. I seldom hear people reveal themselves, sometimes warts and all, with such honesty and without worrying about what others think. It is my experience that people who can do so are not only very healthy but are also the most accepting of others.”

I told her most sincerely that that was one of the kindest and most meaningful things anyone had ever said to me. She seemed to be speaking with some professional authority, and I wonder if she might have been a psychologist or social worker – although I know for certain that on this day she was my angel!
© Don Wilhelmsen
Powered by ZENFOLIO User Agreement
Cancel
Continue