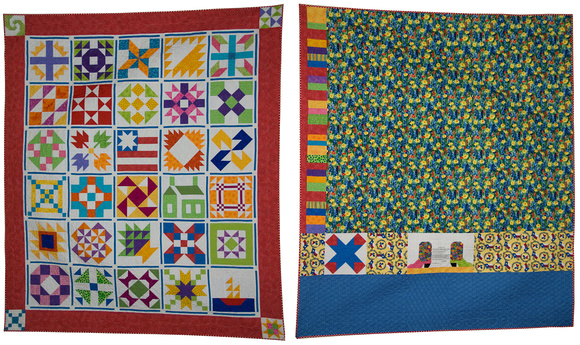 A Happy State of Mind

I participated in Quilt Etc.’s Block-of-the-Month class for 2006-2007. The theme for the year was “From Sea to Shining Sea,” and each month we received the patterns for three or four traditional State blocks. I chose to do my quilts in brights. After completing the blocks in August 2007, the unfinished project sat on the shelf until May 2008, when I figured out where I wanted to go with it

I chose to join the 30 blocks I had made with 1.5-inch pieced sashing strips.
The four corner blocks are (upper left, moving clockwise): Indiana, Alaska, New Mexico, and Pennsylvania.

The 12-inch blocks in the body of the quilt are:

The back of the quilt is dedicated to the Lone Star State of Texas and the many happy memories we have of our twenty-six years there.