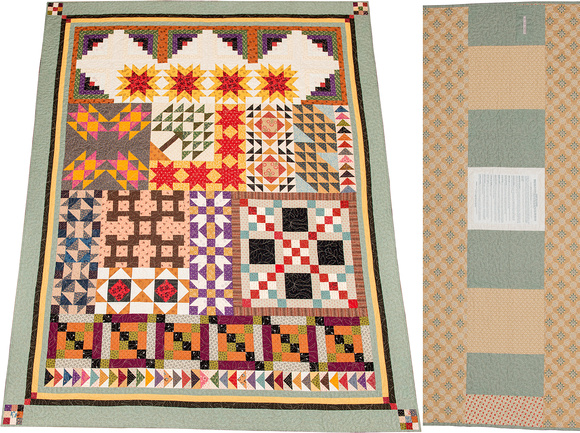 Joseph Smith, the Prophet and Seer of the Lord, has done more, save Jesus only,
for the salvation of men in this world, than any other man that ever lived in it.
– Doctrine and Covenants 135:3

During 2016, our neighborhood quilt group, under the guidance of Mindy Mellenthin Ulibarri, chose to make quilts using this pattern first published in 2005 to commemorate the 200th anniversary of the Prophet Joseph’s birth. Each block represents significant events in the prophet’s life. Looking at the quilt as four sections (top to bottom), the guide here explains the symbolism of each block:

BRIGHTNESS AND GLORY (red and gold stars) represents the First Vision. “When the light rested upon me I saw two Personages, whose brightness and glory defy all description, standing above me in the air. One of them spake unto me, calling me by name and said, pointing to the other—This is My Beloved Son. Hear Him!” – JS-H 1:17

TREE OF LIFE (middle left, second section) represents Joseph translating the Book of Mormon, which includes the story of the Prophet Lehi’s dream of the tree of life.

BROKEN WINDOWS (middle right, second section) represents the times that mobs came in the dead of night, breaking windows and doors to take Joseph away and torture him.

OCEAN WAVES (right, second section, blues) represents the travels of missionaries to Great Britain during the early days of the Church as well as the thousands of Saints who immigrated to America.

BROKEN DISHES (left, third section) represents how Church members collected broken dishes and glass to put in the plaster of the Kirtland Temple so the outside walls would sparkle in the sun.

TRUE LOVE’S KNOT (third section, peach and brown) represents the love and loyalty Joseph and Emma felt for each other. Their love was tested and strengthened through sickness, injury, the heartbreaking loss of children, trials, and tragedy.

A HOUSE OF ORDER (below True Love’s Knot) represents the organization of The Church of Jesus Christ of Latter-day Saints on April 6, 1830.

SISTER’S CHOICE (middle, third section) represents the organization of the Relief Society in Nauvoo in 1842. The purple fabric is to remind us of our divine nature and royal destiny.

KING’S HIGHWAY – (right, third section) Joseph traveled the roads to Carthage even though he knew they would ultimately lead to his death. The colors are symbolic – the red represents his blood and the black represents his death.

A SONG OF PRAISE (fourth section, six blocks) pays final tribute to Joseph and represents the hymn Praise to the Man, a poem written by W. W. Phelps a month after the prophet’s martyrdom.